My God did you see the match last night? Jamie Vardy is some lad! After the match being pretty tough throughout even with many attempts for goals from both sides; the real game began in the second half. 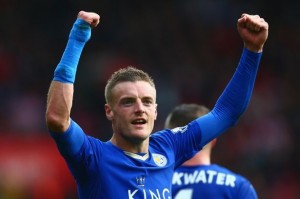 After Vardy’s Jaw-dropping goal 61 minutes into the game, all fans were shocked and had hope that Leicester had a fighting chance to beat Liverpool FC in the premier league game. 25 Yards beyond Simon Mignolet to set Leicester on their way to a well-deserved 2-0 victory. It was a pretty shocking result when Vardy scored again just ten minutes after the first goal, ensuring that Leicester City Won the match.

After Vardy’s unbelievable performance last night, he has been signed for the next three and a half years with Leicester City. Yes lads that’s right, the 29-year-old will be earning £40,000 a week until Summer 2019. Damn, he’s guaranteed to be minted for the next 3 and a ½ years… I’m a tad bit envious…

Next Leicester City Match is this Saturday against Man City; Question is, will Leicester’s striker preform as well as he did on Tuesday?